Victoria Beckham, Britney Spears, Alicia Silverstone, Kate Moss, Naomi Campbel, and Jennifer Aniston are names that surely just by listening to them take you back to your childhood if like me you were born in the 90s.

Unlike the predecessor decade, the ‘90s were characterized by bringing much more minimalist makeup trends, as far as hair is concerned, the playful and risky style prevailed on the red carpets and fashion magazines.

The era of supermodels like Cyndi Crawford, Christy Turlington, and Linda Evangelista took over the catwalks, the fashion industry, and pop culture.

Important makeup and skincare brands such as Bobbi Brown, Nars, and Origins saw the light during these ten years.

Movies like Clueless and series like Friends set a great trend among young people of the time.

If you want to know more about the makeup trends of the time, as well as how they are worn today, read on!

Key events in makeup in the 90s

As we mentioned earlier, major makeup brands that are positioned today released their first products during the 90s.

→ You may also like : The ultimate 70’s makeup style

Bobbi Brown began by launching her lipsticks under the name Bobbi Brown Essentials in 1991, for its part Origins although it was released in the 80s, first arrived in the USA in the 90s.

In 1991 Bobbi Brown launched its first line of lipsticks, the success was, that four years later Estee Lauder acquired the rights to the brand.

Today Bobbi Brown is one of the most recognized makeup firms worldwide.

The French company was founded by French photographer Francois Nars in 1994, like many others it started with only a line of lipsticks that were for sale at Barneys.

For several years the firm became part of the Shiseido group and today you can find its products in different department stores.

At the beginning of the decade, Origins arrived in the United States, and in this same decade, to defy, they put the activated carbon mask on sale and opened their first store in the USA in Cambridge, Massachusetts.

During the remainder of the 90s, they dedicated their work to expanding the brand and reaching other countries such as England and Germany.

Anastasia Soare, started with one of the most coveted beauty brands with her beauty salon located in Beverly Hills, one of the most exclusive areas of Los Angeles; hence the name of your brand.

One of the products that revolutionized the market and helped to position the brand was the brow shaper and the patented Golden Ratio method.

The brand was founded in California, a state where its main offices are still located.

Urban Decay was created to defy the trends of the decade unlike the pink tones that gained great strength, the brand distinguished itself by proposing and inviting women to take risks with other innovative tones such as Smog, Rust, Oil Slick, and Acid Rain.

Women who were icons of the 90s

The 90s was a time when actresses and socialites began to gain notoriety Drew Barrymore, Alicia Silverstone, and Jenifer Aniston were some of these references.

On the music side, Britney Spears took the show scene becoming the princess of pop, the Spice Girls were a ‘boom’ during the time and over the years Victoria Beckham influenced the young women of the time with her risky looks.

Gwen Stefani was an ambassador for the famous and trendy ‘space buns’, as well as lipstick in darker shades.

The 90s was also a decade known for the great relevance of supermodels, Naomi Campbell, Cindy Crawford, Claudia Schiffer, and Linda Evangelista were the icons of the time.

Makeup trends in the 90s

It was one of the most iconic trends of the time and the goal was to give the appearance of more volume on the lips.

In that decade, women used to outline their lips with a pencil much darker than the color of the lipstick.

Today Bella Hadid is one of the celebrities who has dared to bring this trend back.

Although during the first decade of the 2000s they became the least desired shade, in the 90’s it was one of the trends that prevailed.

The princess of pop, Britney Spears was one of the main ambassadors, back then the trend was worn in ‘dusty’ tones, while today it is common for us to see her in much more intense shades of blue with nude lips.

Dare to try! It can be the ‘statement’ of your look.

Who does not remember Drew Barrymore setting a trend using burgundy and brown tones on the lips?

Although in reality, they are trends that never went away, thanks to this nostalgia Fromecades we often see celebrities wearing these types of tones on the red carpets.

Currently, it is common for makeup artists to combine these types of tones with smokey eyes in neutral tones or with much more natural eyes but always framed by long and defined eyelashes.

This trend was the best option to create a metallic effect on the lips. If you want to try and see how it looks on you, you can apply a layer of your favorite lipstick and apply the ‘frosted’ effect on top of it.

According to experts, the most recommended shades are brown and bronze since if you opt for a silver one you run the risk that your lips will look ashy or dusty.

Another recommendation when creating a frosted lips look is that if you are already going to apply the tone and metallic shine to your lips, keep a matte effect on the rest of your face.

For my point of view, makeup is a tool to highlight your natural beauty, and definitely using pastel shades can be an ally to achieve this goal.

According to makeup professionals, these types of colors can be used to complement the natural tone of your eyes, for example an eyeshadow in ‘baby blue’ color is a good option for people with brown, hazelnut, and green eyes ”.

If you plan to try this trend, you can try combining it with lips in nude or pastel shades.

How to create a beauty look inspired by the 90s?

While today we are more used to seeing and wearing makeup that is much dewier or with the look of healthy skin and natural glow, in the 90s matte skin was the best of the best, as Drew Barrymore shows in this video where she shares her best tips to achieve a makeup inspired by the 90s with a slightly more updated touch.

Ana Vega is the WTT Social Media Manager, and writer. She has more than 5 years of experience working in different fields of marketing. Previously she worked at Grupo Reforma, one of the most relevant news outlets in México. In her free time, you can find her reading fashion magazines like Vogue and Harper’s Bazaar or going out for a run.

Welcome to our Makeup category

From tutorials to product reviews, you will learn everything you need to know about Face, Lips, Eyes and Cheeks Makeup ! 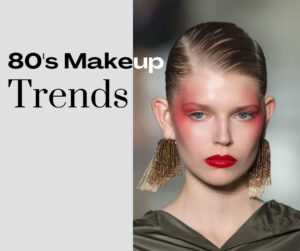 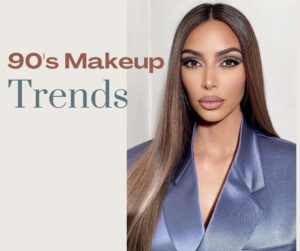 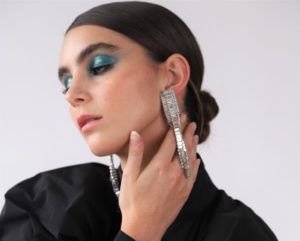